Product Delivery : You will receive a receipt with download link through email. If Your Dream Is To Become An Online Entrepreneur, Travel The World While Earning A Serious Income From Your Phone/Laptop, Or Even Just To Escape The Trap Of A 9-5 Job, Then Keep Reading…

Hi I’m Nick. At 21 years old I quit my job and decided to go all in on Instagram.

By 22 years old, I was earning 6 figures per year from Instagram,and was able to travel the world whilst earning more money than most surgeons make.

But it wasn’t always like this… Just 1 year prior I was a depressed, lazy failure who never got out of bed.

Now I promise to teach as many students as I can on how to make money on their own terms, from their phone wherever they may be in the world.

We now have a thriving community of Instagram Elite students, many of whom who earn over $10,000 per month.

I am going to teach you how you can follow the exact same path that I did in less than 3 months….. (yes, really!).

First; a little bit about me:

My Story So Far…

I was just like most of us are; working long hours in a job I hated, and praying for something better. I knew my life wasn’t supposed to revolve around 9-5 days with 2 hours travelling and a 45-minute lunch for the next 45 years, but what could I do about it?

I Needed A Break, A Big One.

I started googling ‘how to make money online’, I stumbled across internet marketing forums. A lot of them were talking about Instagram. They were talking about how much money they had made, and I was instantly hooked.This was the day when I decided I was no longer going to be a sucker to the rat race. I decided that I wanted to live life on my terms.

A Fire Was Lit Under My Ass.

Every evening after I came home from work, I spent hours researching all the latest Instagram methods, I bought all of the courses I could get my hands on, and reached out to as many experts as I could, in the hopes that I could earn even a little bit of money online. I started to realize that almost all of the courses and knowledge out there was based on out-dated methods which showed me how to grow pages, but not how to earn real money from them. They taught me how to start up an agency, but not how to actually land and retain clients.

Finally. A Taste Of Success.

After months of banging my head against the wall, testing, experimenting and failing on Instagram, I earned my first dollar online. I was promoting apps on Instagram and getting paid for each download. By this point I was able to grow Instagram accounts, and was starting to learn how to monetize them.

I quickly started scaling my operations, within 3 months I went from earning $0 online to earning $150 per day.

With my confidence reaching all time highs, I went out and approached a local business. A shaky in person conversation, and a sweaty phone call later on with the boss and I had landed my first client. £50/month. Pretty much nothing, but it was something.

After securing my first client, I knew that I could get tons more paying clients, and that I had to make this work. 6 months later, my agency was pulling in 6-figures per year.

‘Within Six Months I Was Able To Start Earning Over 6 Figures While Working Less Than 10 Hours A Week. Now Let Me Show You How To Do It In Half The Time.’ 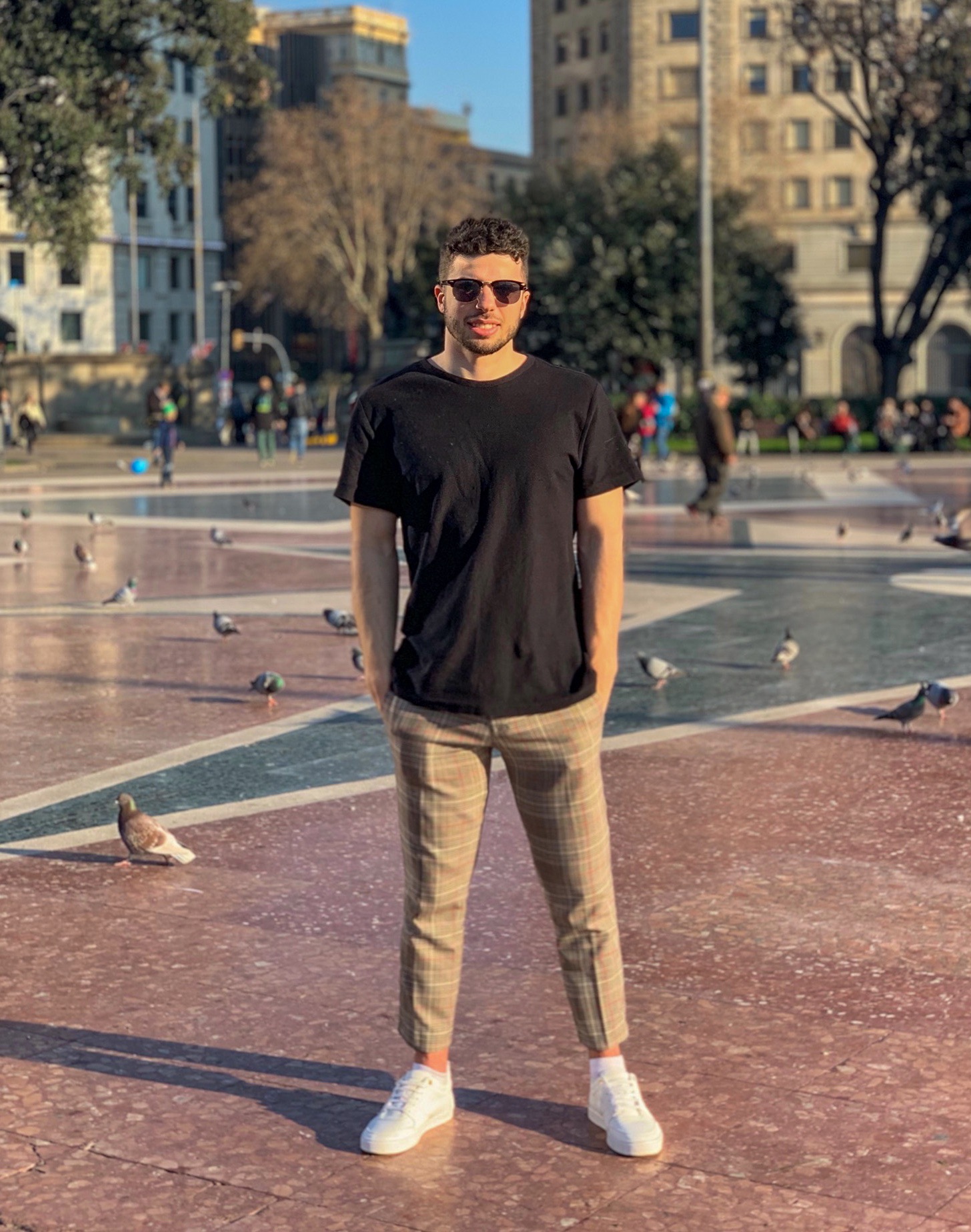 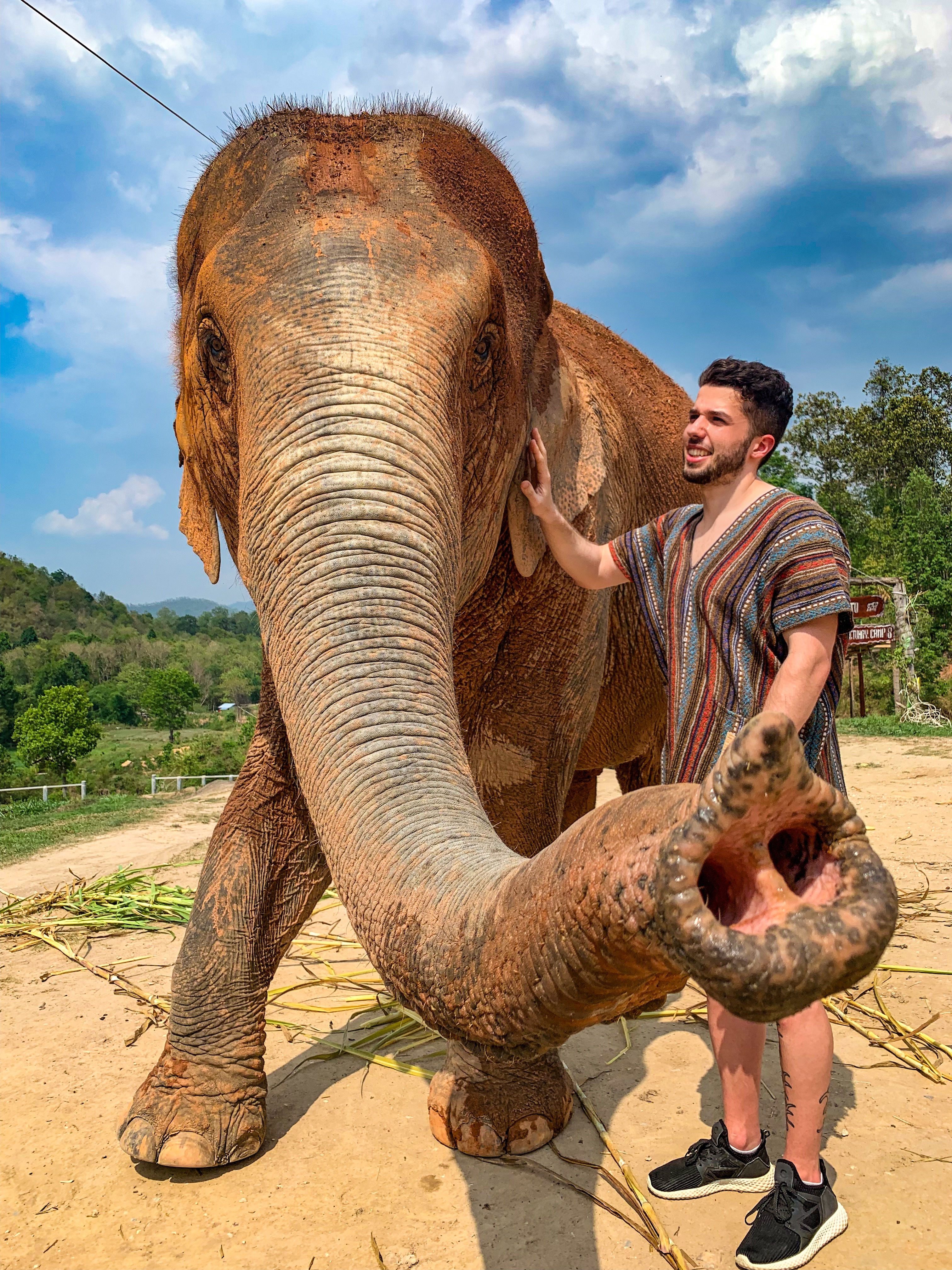 Not only am I able to work from anywhere in the world with an internet connection, I also earn more than most doctors do. There is no job on earth that would pay me anywhere near what Instagram allows to me to make, not to mention the time freedom that comes with it.

From earning £1500 per month to having days like this…

(these screenshots were taken over a 4 day period while I was in Thailand. Needless to say, I wasn’t doing any work) 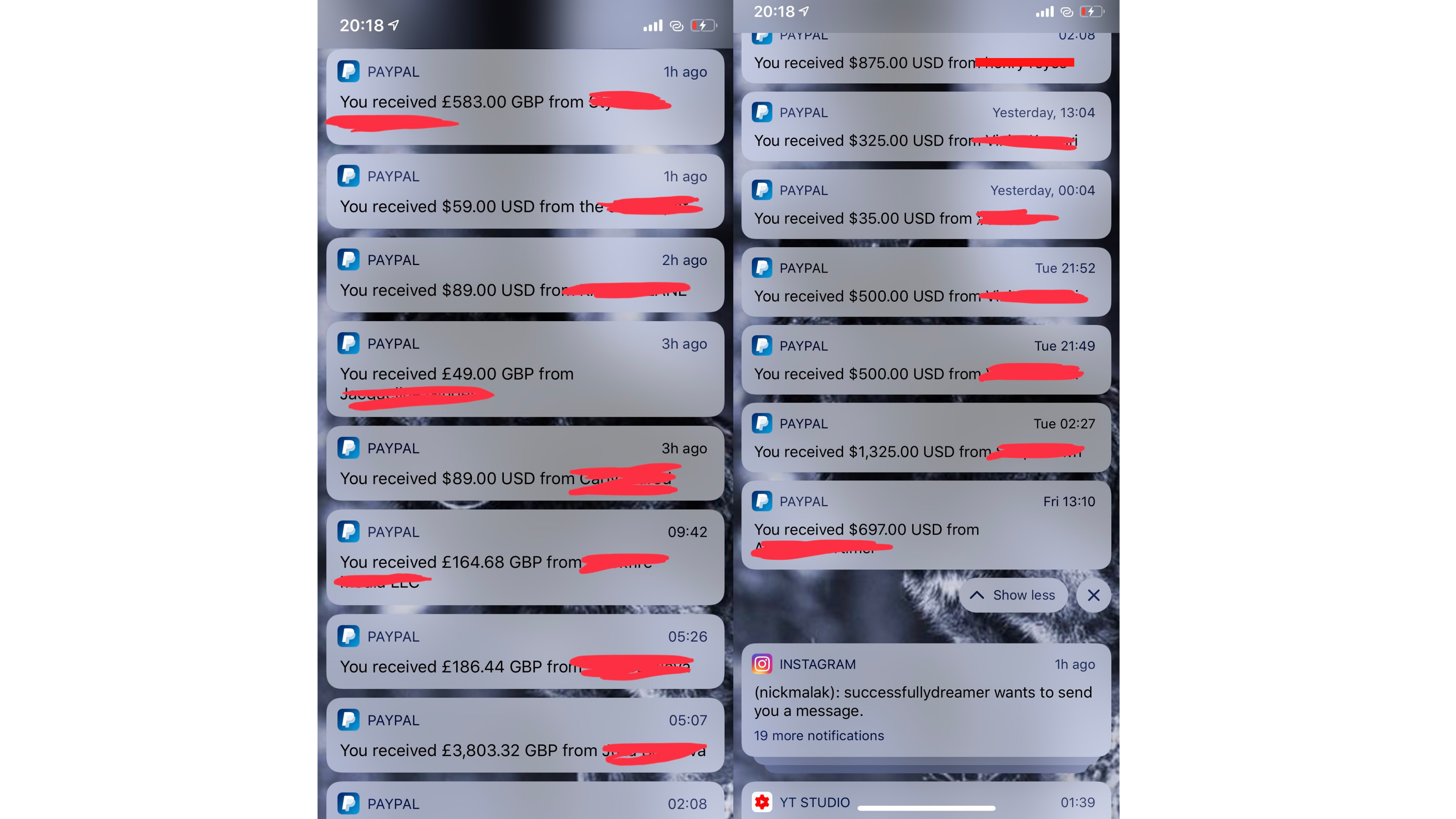 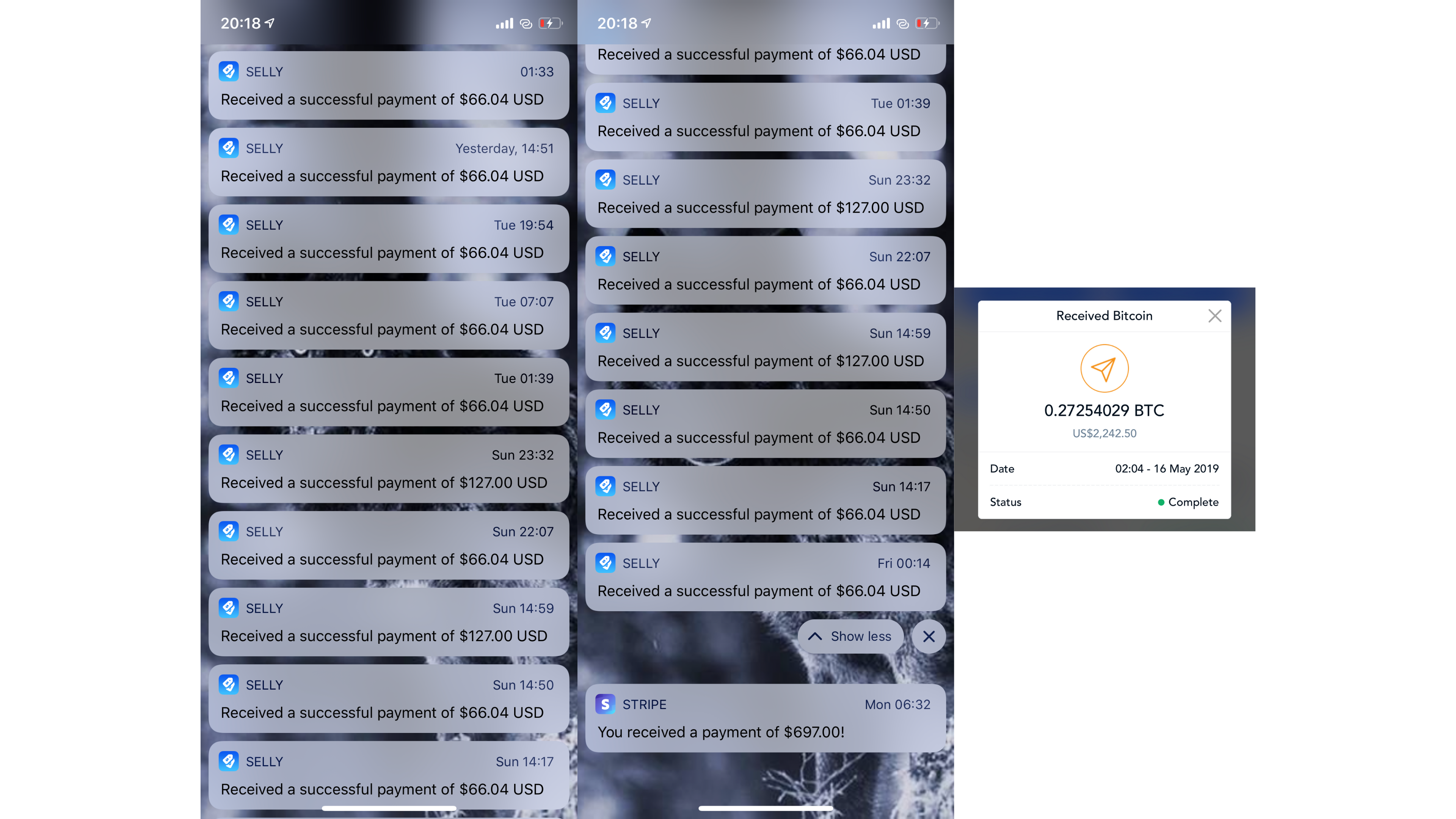 All this from 1 social media app…

Instagram really has been a life saver and a real eye-opener for me, as to what is possible in the age of the internet entrepreneurs and online marketing.

I built my network of Instagram accounts which now has over 6.5 million followers combined, and I used this to leverage high retainer clients and generate a second income from sponsored posts, shoutouts, affiliate marketing & more. Now, it is my turn to give back.

I want you to be able to travel the world and live life on your terms.

I want you to earn more money and work fewer hours.

I want you to live the life you deserve.

Here’s to your success.

Read On To Learn Why OWN THE GRAM Is Considered The Most Comprehensive Instagram Marketing Course Available In 2019.

This course offers value never seen before in Instagram marketing;

✅ How to find, prospect and secure clients who will pay you a recurring monthly income to manage their Instagram accounts

✅ I will show you how to actually MONETIZE Instagram, as well as grow them

✅ Additional strategies that will help you in all aspects of online entrepreneurship, business and personal development

✅ Advanced ‘hands-off’ automation system that no one else is teaching, allowing you to manage hundreds of accounts with ease

I designed this course to not only be the most in-depth, step by step guide to starting your own Instagram agency. Not only to be the best growth and account monetization course. But also, to have enough detail that you will be so inspired, so confident that when you do start your agency, you will go from strength to strength and find success not only financially, but you will grow as a person and as an entrepreneur, just like I did.

What will amaze you the most is that even if you decide you don’t want to start your own agency. The contents of this course will show you how to create, automate and monetize Instagram accounts to generate you a greater than full-time income from part-time hours.

What can I teach you that others can’t?

I spent thousands upon thousands of pounds on all of the marketing courses out there, not to mention years of my life. Searching for the BIG SECRET.

I realized that some of these courses were great at teaching you how to grow accounts. But where all of them failed, was teaching how to monetize effectively. After all, the whole point of doing this is to make money, right?

Most other courses out there will show you outdated tactics to grow your accounts. I am talking about things like putting all your hopes on going viral.

But what happens when Instagram changes their algorithm again and you’re back to square one? Will you get a refund on your course? I doubt it.

The contents of my course will teach you methods which don’t depend on outdated tactics or investing money on likes, fake followers and shout outs.

My methods which have been tested time and time again will always work. They are designed to work regardless of Instagram’s algorithms and any changes that happen.

What can you expect from this course?

The world will become your oyster. Literally.

I am not just giving you access to a course, I am teaching you a skill.

This skill will allow you to make six figures from anywhere in the world.

These aren’t celebrity pages, as we all know celebrities can make well into SIX FIGURES per post.

These figures are from normal people, like you and me who have built accounts and are now teaming up with sponsors and are getting paid to promote products, giveaways and more to their followers.

Businesses will easily pay you $2000+ per month to manage their accounts for them.

Just imagine what you could do with an extra $2000 per month, week or even per day?

This is your opportunity, to invest in your dream.

It is now 2019, and we are thriving in the age of social media. This is the age where 17 year old online entrepreneurs are making more money than brain surgeons.

Doberman Dan – How To Make Big Money From Small Lists